The Greatford war memorial lists four men who died during the First World War (whose names are read out annually during the Remembrance Sunday service at Uffington Church): 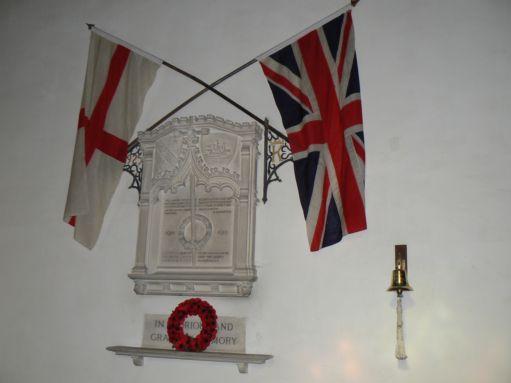 FRED GARNER: “4th Battalion, Lincolnshire Regiment, died July 2nd 1916.”
Fred Garner was born in Dunsby in 1893, but by 1901 his parents (William and Annie) and their children had moved to Stowe Road, Greatford.  The 1911 census described Fred as a “waggoner on farm.”  Military records show that Private Frederick Garner died of wounds on 2 July 1916.  He had been a member of the 4th Battalion, Lincolnshire Regiment which on 1 July 1916 took part in a diversionary attack on Gommecourt, slightly to the north of the main assault which launched the Battle of the Somme.  Fred is buried at Warlincourt Halte British Cemetery, Saulty (pictured in attachment below) – a cemetery about 10 miles NE of Gommecourt which was used from June 1916 to May 1917 by two Casualty Clearing Stations – Fred evidently was wounded during the attack and evacuated from Gommecourt but died shortly afterwards.

HARRY HEADLAND: “8th Battalion, Bedfordshire Regiment.  Killed in action July 9th 1916.”
Harry had been born in Hoby (near Melton Mowbray) in 1887 to John and Ada Headland, but by the 1890s  the family moved to Main Street, Greatford , though by 1911 John and Ada and some of their children lived in Stamford Road, Barholm, while Harry was living at Aunby Lodge as a Horseman on Farm.  Military records show that by 1916 Private 19747 Harry Headland was actually in the 6th Battalion, Bedfordshire Regiment.  The Battalion took part in the Battle of Albert (1-13 July – the opening phase of the Battle of the Somme).  Harry was killed in action on 9th July (aged 29).  He is commemorated on the Thiepval Memorial (pictured in attachment below) – one of the 72192 officers and men of the United Kingdom and South African forces named there who died in the Somme sector before 20 March 1918 and have no known grave, (though his body may be in one of the many graves in the Somme area bearing the inscription A soldier of the Great War known unto God).

ARTHUR PICKERING: “10th Battalion, Staffordshire Regiment.  Killed in action March 3rd 1917.”
Arthur was born in Greatford in 1889.  In 1901 the family lived in Stowe Road (the next entry in the census to the Garner family).  His father died in early 1904, and in 1911 Arthur was resident in Greatford with his (widowed) mother he was working as a domestic gardener.  Military records show that when he was killed in action in March 1917 (aged 27) Private 40419 Arthur Pickering was in the 4th Battalion, Worcestershire Regiment.  Like Harry Headland, he is commemorated on the Thiepval Memorial.

ARTHUR EMPSON: “Sherwood Foresters.  Killed in action March 28th 1918.”
Arthur had also been born in Dunsby in 1893, but by 1901 his family were living in Main Street, Greatford and the 1911 census records that Arthur was living with his parents, two sisters and a brother at Manor Farm Yard, Greatford.  Arthur was a Horseman on Farm, his father (Henry Empson) was a Shepherd on Farm.  Military records show that Lance Corporal 48700 Arthur Empson, 13th Battalion, Liverpool Regiment, (formerly Sherwood Foresters, Notts and Derby Regiment) was killed in action 28th March 1918 (aged 25 years) in the first Battle of Arras.  He is commemorated on the Arras Memorial (pictured in attachment below), among 35,000 other servicemen from the United Kingdom, South Africa and New Zealand who died in the Arras sector between the spring of 1916 and 7 August 1918 and have no known grave.